Today over 500 civil society organisations from six continents urged world leaders to renew efforts to facilitate an end to the Russian war in Ukraine and to end a dangerous dependence on fossil fuels that is driving war, instability and conflicts globally. Two months after the start of this illegal war, which continues to kill and displace millions of people in Ukraine, this letter calls on national leaders to view this moment as an inflection point and usher in global peace, international solidarity and stability that is built around the rapid, just and equitable transition to renewables and energy efficiency technologies. 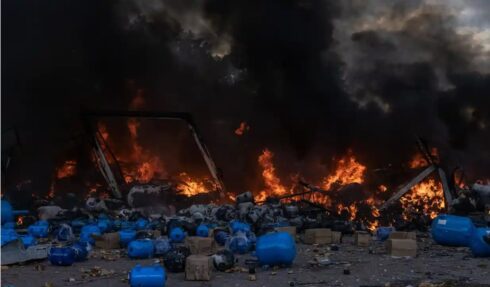 The letter states: “Humanity now faces a cascade of emergencies. The Russian military, business and political elites around President Putin are committing brutal crimes in Russia’s war in Ukraine, annihilating basic principles of state sovereignty and undermining democracy. At the same time, the climate crisis is wreaking an “atlas of human suffering”. These crises may seem entirely independent, but they share the same dangerous thread: dependence on fossil fuels.”

The letter specifically urges leaders to stop fossil fuel expansion, tax windfall profits, and eliminate subsidies and other financial support to the oil, coal, and gas industry. The letter also demands that safe, distributed, democratic renewable energy systems and energy-efficiency technologies proliferate in the place of fossil fuels and reach the one billion people still without electricity.

“Importantly, the renewable energy future must not repeat the violence of the extractive, fossil fuel past. Justice must ground this transition to redress the climate, colonialist, racist, socioeconomic, and ecological injustices of the fossil fuel era,” the letter states.

The Intergovernmental Panel on Climate Change (IPCC) recently released a report confirming the scientific mandate to make rapid and deep cuts in carbon emissions—by phasing out all fossil fuels and making transformative shifts for energy efficiency, renewable energy, and forest and ecosystem conservation—for a viable chance to preserve a livable planet. 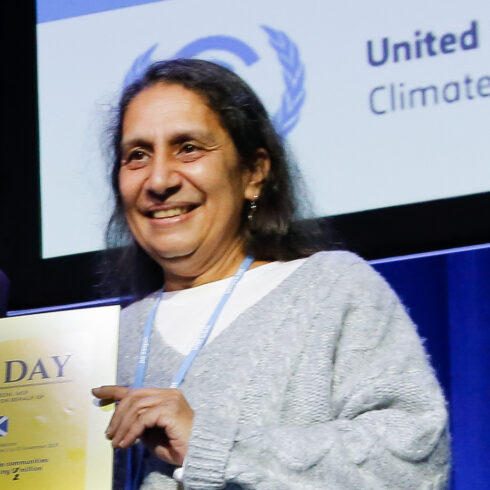 “We see the grubby, dirty fingerprints of the fossil fuel industry all over this illegal invasion of Ukraine. The blood money funding this war and many such conflicts is from a dangerous addiction to fossil fuels. Long before this war started millions of us have been demanding an end to the fossil fuel era- and we now demand this more urgently and more loudly. Fossil fuels are a clear and present danger to us all- and the most recent science has confirmed this. We demand an alternate future for humanity and all that thrives on this planet, one built on renewables, peace, and democracy. It is our best and only chance for peace and survival.” — Tasneem Essop, Executive Director, Climate Action Network 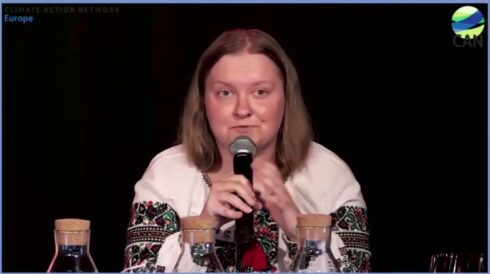 “Russia is waging a war on Ukraine, but also on the climate. It has been supplying the world with fossil fuels for decades, creating dependencies which are now being used for blackmail. Are we learning our historical lesson yet? Quitting Russian coal, oil and gas which fuel the war on Ukraine should only be the first step for the world. Countries must break free from their fossil fuel addiction and stop jumping from one supplier to another.
We want to see the criminal fossil fuel industry end in the closest decade and transition to renewable energy as fast as possible. There should be no place for dirty and harmful energy suppliers in the world we’re building.” — Olha Boiko, coordinator of Climate Action Network Eastern Europe, Caucasus and Central Asia.

«The war in Ukraine, like all recent wars in the last few decades, is driven by the world’s greed for fossil fuels and like all wars, the war in Ukraine is causing shortages and inflation around the world. Taken together with the relentless effects of climate change, and the post-pandemic slow economic recovery, the global south is faced with unprecedented challenges to ensure its very survival. It is indeed insane that nation-states are waging war over fossil fuels at a time when cheap, steady and decentralised renewable energy is already out there and ready to be deployed. Now more than ever, it is time for peace, and for concerted efforts by the world governments to come together to address climate change. For that to happen the world must phase out fossil fuels and embrace new renewable energy technologies at the earliest.« Sanjay Vashist, Director, Climate Action Network South Asia.

“The war in Ukraine must be seen as an opportunity to speed up the transition to renewable energy and end fossil fuel addiction once and for all. As the current President of the European Union Council, France must lead the way to push for bold and radical energy reforms that are aligned with the Paris Agreement’s goal. These reforms must include energy savings and efficiency measures to secure a sustainable and just future.” Aurore Mathieu, International Policy Officer of Climate Action Network France

“Fossil fuels, when their external costs are properly counted, are now costing us all far more than we realise. The era of apparently cheap, easy fossil energy is well behind us; it ended in the 1970s, in fact. Now that cheaper alternatives exist, every nation that genuinely respects the human rights of its citizens must accelerate transition away from this deadly dependency.” – David Le Page, coordinator, Fossil Free South Africa (member of SA CAN).

«Human induced climate change and the war on Ukraine have the same roots: Fossil fuels and our dependence on them. To stop this war we need a global divestment from, and an embargo on, Russian fossil fuel as soon as possible. The struggle over fossil fuel has been a conspicuous factor in many recent conflicts, including the Iran-Iraq war of 1980-1988, Gulf war of 1990- 1991and the Sudanese civil war of 1983- 2005 among others. To help ensure peace, and stop the climate crisis, Governments need to cut their dependency on fossil fuels and phase them out immediately. Every Kilowatt-hour of electricity generated from solar, wind, hydrogen reduces our dependence on fossil fuels. This addiction to fossil fuels places energy security and climate action at the mercy of geopolitics. Unlike fossil fuels RE is less likely to feed geopolitical power struggles or inequality as its infrastructure has the potential to be largely localized. Governments must act for peace and a safe climate with a transition to efficiency and renewable energy as quickly as possible.» Wellington Madumira National Coordinator Climate Action Network Zimbabwe

“Fossil fuels are making the world a much more dangerous place. Not just in terms of the impacts of climate change, but also in terms of geopolitical forces. Ukraine is the perfect example. The world will be a much safer, much more amenable place for all of humanity once we have weaned ourselves off dependency on oil, coal and gas. Australia has the opportunity to fast-track the transition to renewable energy as we have abundant solar and wind potential. It is our duty to all of humanity to rapidly move Australia from exporting coal and gas to exporting green hydrogen and ammonia.” Glen Klatovsky, acting Executive Director, Climate Action Network Australia.

“Extractivism has for centuries been the root causes of displacement, extermination and horror for communities in the global south and north. That same extractivist and colonial model continues to cause suffering for vulnerable people and communities. The barbarism reflected in Putin’s war against the Ukrainian people is a case in point. The elimination of fossil fuel consumption today is more urgent than ever, not only fossil fuels coming from Russia.

The transition to renewables is a must to stop financing this and other wars across the world. Such a transition will not only prevent further losses and damages attributable to the climate crisis in the future, but will also limit the potential for further brutalities and abuses against vulnerable communities”. Alejandro Aleman, Node Coordinator, Climate Action Network Latin America.

«At a time when the world needs to solely focus its attention on averting the ongoing climate emergency and reversing the brief, rapidly closing window to secure a liveable future, the war in Ukraine is an unmitigated disaster and tragedy. It’s the worst thing which could possibly happen. The linkage of the war to fossil fuels is clear in how prominently they feature in the war narrative, and the sharp increase in the  price of oil and gas worldwide causing economic distress worldwide, especially tho those who can least afford it. If there ever is a sign that now is the time for the global community to wean themselves off fossil fuels, shift financial flows away from fossil fuel production and subsidies, and mainstream renewable energy solutions, this is it. This transformation should be accompanied with a just transition framework to ensure the shift towards renewable and net-zero carbon emissions is fair to all, especially the most vulnerable communities.» Nithi Nesadurai, Director and Regional Coordinator, Climate Action Network Southeast Asia

“It is clear that our use of and reliance on fossil fuels is a threat to our safety — by impacting our climate, our public health, and our security. Delaying the shift to renewable energy and extending the life of fossil fuels means continuing to expose ourselves to these impacts, which will only worsen as the climate crisis grows. Now more than ever, phasing out fossil fuels means protecting all of us from threats to our safety and security.” Evan Gach, Node Coordinator, Climate Action Network Japan