New IPCC report: «The real dangerous radicals are the countries that continue to burn fossil fuels» 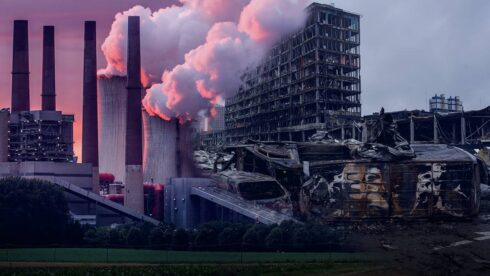 Greenhouse gas emissions must peak by 2025 and fall by 45% by 2030 to give the world a chance to limit temperature rise to 1.5°C and avert irreversible effects on the planet, says a new report from the Intergovernmental Panel on Climate Change (IPCC).

UN Secretary-General António Guterres said some governments and businesses are «lying» about being on track for 1.5°C. He warned: “Some government and business leaders say one thing and do another. Simply put, they lie. And the results will be disastrous.»

“Inflation is on the rise, and the war in Ukraine is driving food and energy prices skyrocketing. But increasing fossil fuel production will only make matters worse. Climate activists are sometimes called dangerous radicals, but the real dangerous radicals are those countries that continue to increase the production of fossil fuels,” Guterres said.

The IPCC report speaks of the need for urgent changes in all sectors of the economy in order to avoid the worst consequences for humanity. The analysis shows that total emissions need to peak before 2025 in order not to exceed 1.5°C of warming, beyond which the effects may be irreversible. The report shows that global action is still not enough despite pledges from governments in Glasgow (COP26). This clearly shows that finance, technological innovation, sound policy, and lifestyle changes, including drastic reductions in fossil fuel use, are critical to effective and equitable climate change mitigation.

Quotes from experts on the report

Olha Boiko, Ecoaction, Coordinator of CAN EECCA, based in Ukraine:

“It is heartbreaking for me, as a Ukrainian climate activist, to be living through a war which has fossil fuel money at its core. The money, that we begged not to invest in dirty energy, is now flying over our heads in the form of bombs. The dependence of some countries on fossil fuels is being used for blackmail. We need to come out of this war better than we were. We need to learn how to act in a more intelligent way and put the great power of people into green recovery. I want us to be a part of building a more just and greener world which prevents fossil fueled dictatorships from getting this much power. Science is with us, we know what we have to do.”

“There is irrefutable scientific evidence that the consequences of climate change already today have a great impact on the economic development of Kyrgyzstan and the Central Asian region as a whole. It is clear from the IPCC Sixth Report that our government faces a difficult task in adapting and reducing vulnerability to the effects of economic and social changes. With limited resources, in my opinion, Kyrgyzstan should focus on the development of the private sector in the field of renewable energy, without carbon transport and sustainable land use.”

“The recent IPCC report on options for reducing CO2 and all GHG emissions has brought once again to the attention of policymakers, business and industry alike the enormous potentials for doing so particularly in this decade. Which is considered by scientists as crucial as a “make or break” period for staying in the trajectory for a climate-resilient development of all countries in line with equity, a Just Transition and not exceeding the survival limit of a 1.5°C global warming by end of century compared to pre-industrial times. The report and the underlying chapters show clearly that until 2030 and beyond fossil fuel use have to be cut drastically. The scientists and supported by the governments (!) in the negotiations concluded that solar and wind power, accompanied by energy efficiency in all economic sectors have the highest cost-effective potentials to lead for a fare-well to fossil fuels. Reducing deforestation and supporting restoration of degraded ecosystems as well as diet shifts away from high-carbon meat-based nutrition to a much more balanced diet are additional very effective opportunities and with large co-benefits for health and biodiversity. Reducing and abolishing direct subsidies to fossil fuels will help to cut emissions by up to 10%. Since the large region of Eastern Europe, Russia and Central Asia have together very high potentials for energy efficiency, solar and wind power in often high-carbon societies, this message and analysis needs to be heard.”

Kaisa Kosonen, Senior Policy Advisor, Greenpeace Nordic:
“It’s game over for fossil fuels that are fuelling both wars and climate chaos. There’s no room for any new fossil fuel developments and the coal and gas plants we already have need to close early. While our leaders have been claiming they’re doing their very best on climate, the scientists have just proven they are not. There’s plenty of potential to do more right now, with huge benefits! Yet, money keeps flowing to problems instead of solutions, and it will only change with credible targets, policies and support aligned with the Paris Agreement warming limit. Both the threats and the opportunities are larger than ever. But so is the power of people who unite for change.”

«The IPCC report highlights the cause of climate problems; fossil fuels did this. Since the Ukraine war started, fossil fuel companies and their executives have been profiting off the skyrocketing energy prices, while many people can barely afford heating or gas. It’s time for a rapid pivot to clean energy.”

“There is no silver bullet for solving climate change, but there is a smoking gun: fossil fuels. The IPCC’s latest report affirms why rapid and equitable phaseout of fossil fuels must be the centerpiece of any science-based mitigation strategy that aims to avert catastrophic levels of global warming. Relying on speculative technologies purported to deliver emissions reductions or removals in the future, after temperature rise surpasses 1.5°C, will cost lives and inflict further irreversible harm. Like Putin’s fossil-fueled invasion and the profit-driven energy crisis it engendered, the Panel’s findings only reinforce that breaking free from fossil fuel dependency is critical for the global climate, for global peace, and for economic stability.”