Ukraine and Kyrgyzstan. How solar power can help communities in crisis 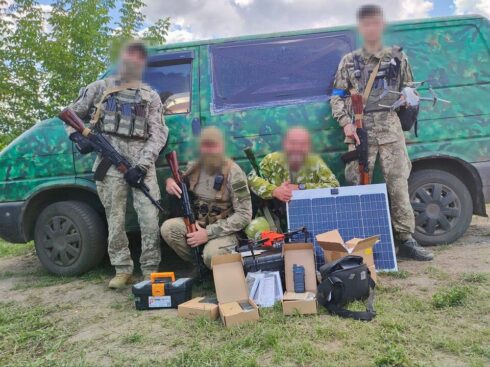 The war started by Russia in Ukraine has put the energy system of the entire country into a difficult situation. Since February 24 Russia has been targeting and destroying Ukrainian infrastructure. There have been attacks on thermal power plants, shelling and seizure of nuclear power plants (Chornobyl and Zaporizhzhia), and damage to the power transmission lines. In this new kind of war energy independence and autonomy have become not a luxury, but a necessity, especially at the frontline.

In September this year, a military conflict arose between Tajikistan and Kyrgyzstan. Dozens of villages in Kyrgyzstan were left without electricity, and hundreds of houses were destroyed. Border security forces need constant energy in order to be able to do their job effectively. We want to tell you how activists in Ukraine and Kyrgyzstan started to solve this problem through their initiatives.

Solar panels to the frontlines

Last year in September Ukraine was expected to enter the top five European countries with the largest share of green energy by 2035. However, the attacks Russia executed on Ukrainian infrastructure destroyed more than 550 MW of solar power plants and home solar power stations.

In August of 2022 CAN EECCA members from Ukraine, NGO Ecoaction, fundraised to buy 10 portable solar panels with batteries and charging devices, and handed them over to the Ukraine army. 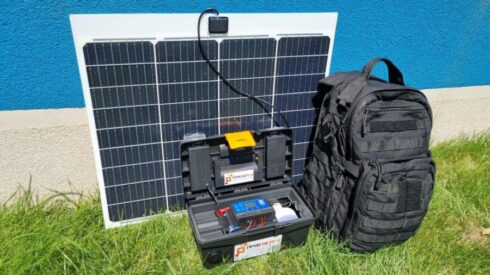 Community manager Olha Tarasenko told us about the campaign:

«From the day of the full-on invasion, the Ecoaction team did our best to support each other and our partners. While documenting the effect Russia’s crimes have on our environment and pushing for more sanctions on Russia, we had to take care of our community. For instance, we delivered humanitarian aid to the coal towns in eastern Ukraine, with which we have been working on the topic of just transition for the past 4,5 years.

Similarly, we wanted to do something useful for our defenders. I think someone from the Ecoaction team just shared a link to an ad for solar panels. And then it clicked. We’ve always known that renewable energy is the way to go. So in crucial times like this, it can not only charge phones but also store batteries, walkie-talkies, and other equipment. We researched, understood the pros and cons, talked with experts, and set up a crowdfunding campaign. We’ve reached our goal in less than 24 hours! It also makes sense. An environmental NGO is collecting money for solar panels to accelerate our victory. Looks like a win-win situation». 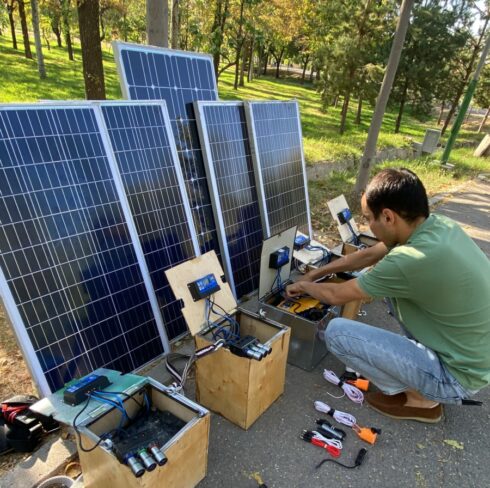 When the border conflict between Tajikistan and Kyrgyzstan began, the main аttacks were on the power lines. Dozens of Kyrgyz villages in the Batken region were cut from electricity, and about 12,000 houses and public facilities were left without the light. In this situation, the most vulnerable places at the border were border checkpoints and troops protecting the border. They were constantly in need of charging facilities. On September 14-16, Kyrgyz citizens began collecting humanitarian aid for Batken people. The group led by civil activist Nurjigit Asanov fundraised for five solar panel stations, and IT engineer civil activists helped them to build small-portable solar panel stations for border guards.

“We were monitoring all humanitarian aid and figured out the most important issue for border troops is energy. Our small team wanted to solve this problem, and I told other volunteers that we had started fundraising. Then experts on small solar panel stations from Uzbekistan provided some online consultation to us to build small stations. In just three days, we made five stations and handed them out to Kyrgyz troops,”- tells the civil activist Nurjigit Asanov.

Kyrgyz engineer and volunteer of the civil activist group Askar Tentimishov has never built solar panel stations before. He is happy that such stations are convenient for border guards to carry. They can charge their mobile phones, drones, or other equipment from anywhere.

“We have implemented a mission to create mini solar power plant stations, which will solve the issues of obtaining energy supply in difficult field conditions through alternative sources. In a short time, we tried to consider all the inconveniences and implement it as a ready-made kit for easy and maximum use. Through such mini-stations, army members can charge the necessary equipment. The acceptance and distribution of solar power stations will be taken care of by our team members!” – Askar Tentimishov told CAN EECCA.