Ukraine and Belarus have necessary technical potential and economic reasoning to implement energy transition and increase the share of «green» energy in the Final Energy Supply to 91% and 81% by 2050 correspondingly. This was announced during the press-conference on November 14, 2017 in Bonn, Germany in framework of the COP 23.

In cases of both countries, reference and alternative scenarios of energy sector development were modeled and compared. Ukrainian study was implemented by the State Organization “Institute for Economic and Forecasting” of the National Academy of Sciences of Ukraine, while for Belarus modeling of the Reference and Energy [R]evolution scenarios was carried by the  German Aerospace Center (DLR), Department of Systems Analysis and Technology Assessment at the Institute of Engineering Thermodynamics. Preparing of modeling results in both countries was accompanied by close cooperation with civil society organizations, public authorities, specialized in renewables business associations and independent experts and with the support of the Heinrich Boell Foundation in Ukraine.

It is incredible, but results show that in case of the implementation of the ambitious Revolutionary Scenario involving a significant reduction in energy consumption and intensive development of RES, Final Energy Consumption in Ukraine will decrease by 27% in 2050, and the share of energy received from RES will be 91% (fig.1). This shows that saved energy resource is the cheapest “resource”, and investments in saving are more feasible than those needed to produce additional electricity and heat to meet the needs of the population and economy as a whole. The electricity will be produced by all RES technologies that will be available in Ukraine until 2050, since they rapidly develop and become cheaper. The most promising among them are wind and solar energy technologies, and bioenergy technologies can become leaders in heat generation. According to the Revolutionary Scenario, the share of wind energy in the structure of the electricity production can reach 45%, solar – 36%, and the share of biomass and waste in the structure of the thermal energy production can reach up to 73%. 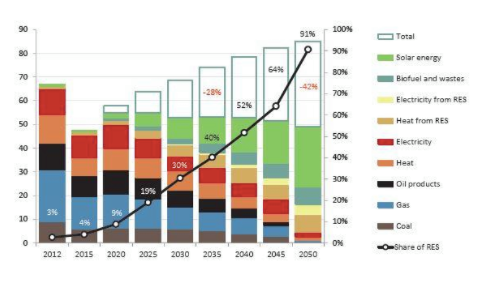 At the same time, political will to implement such the energy transition in Ukraine is not observed so far. As Oleksii Ryabchin, Member of the Parliament of Ukraine mentioned during the press-conference: “Only with strong commitments to reduce emissions, increase energy efficiency and decrease fossil fuels dependency from the Ukrainian government on the one side, and attracting investments  and having access to a green finance on another, this scenario will have a chance for implementation. But we need this scenario to be implemented. Such energy development pattern will allow decentralization of the Ukrainian energy sector, what is highly needed from democracy perspective. And energy cooperatives and households will play crucial role here. In addition just transition can be ensured for workers of coal and nuclear industries until 2050.”

«Ukraine has paid an enormous price for past lack of efforts to reduce energy dependency and continues to pay the price. The solution for the energy security of Ukraine, and, I think, globally, lies in 2 actions: one — the reduction of energy consumption through energy efficiency measures and two — in gradual transition to domestic renewable energy sources. And this is exactly what is needed for fighting global climate change and this is exactly what is needed for Ukraine to reach energy independence.», added Irina Stavchuk, head of local environmental group «Ecoaction».

In case of Belarus, under the Reference scenario, total final energy demand increases by 42% from the current 710 PJ/a to 1010 PJ/a in 2050. In the Energy [R]evolution scenario, final energy demand decreases by 24% compared to current consumption and is expected to reach 540 PJ/a by 2050 (fig. 2). Under the Energy [R]evolution scenario, due to economic growth, increasing living standards and electrification of the transport and heat sectors, overall electricity demand is expected to increase despite efficiency gains in all sectors. Compared to the Reference scenario, efficiency measures in the industry, residential and service sectors avoid the generation of about 20 TWh/a. 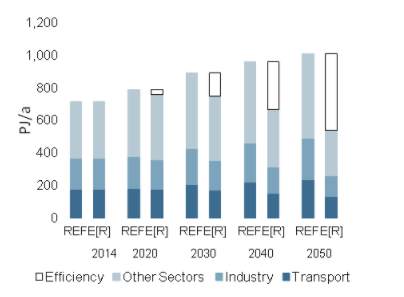 Fig. 2. Projection of total final energy demand by sector – scenarios REF and E[R]  (without non-energy use and heat from CHP autoproducers)

The implementation of the “energy transition” by the studies also will lead for acceleration of GDP growth and better environmental performance. For example, in Ukraine implementation of the Revolutionary scenario will result in radical reduction in greenhouse gas (GHG) emissions which in 2050 might amount only to 10% of the 1990 level (or 85 mln t СО2-equivalent), which corresponds to required efforts at the global level to achieve the goal of the Paris Agreement. While in Belarus emissions of CO2 will increase by 13% between 2014 and 2050 under the Reference scenario, under the Energy [R]evolution scenario they will decrease from 55 million tons in 2014 to 8 million tons in 2050, thus by 85%.

According to the reports for Ukraine and Belarus, the most ambitious energy and environmental targets for final consumption by 2050 will have significant benefits for both the economy and society as a whole. The implementation of the «energy transition» will significantly increase  energy independence for both countries and energy efficiency in all sectors of the economy, reduce the risk of repeated nuclear accidents and decrease greenhouse gas emissions.

The full report “Transition of Ukraine to the Renewable Energy by 2050” can be downloaded here: https://ua.boell.org/en/2017/11/07/transition-ukraine-renewable-energy-2050

The full version of the “Energy [R]evolution: a Sustainable Belarus Energy Outlook” will be published in early 2018.