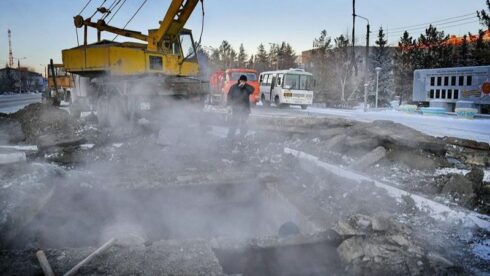 On January 25, 2022, parts of the territories of Kazakhstan, Kyrgyzstan and Uzbekistan experienced a massive blackout. The three countries are united by one power grid inherited from the Soviet Union — the Unified Energy System of Central Asia.

11 months later, the first days of December also brought an energy crisis to two largest countries in Central Asia: Kazakhstan and Uzbekistan. Several cities of Kazakhstan suffered accidents in thermal power plants at the beginning of the new heating season. An especially large one happened in the city of Ekibastuz, in the north of the country.

Meanwhile, small towns and villages in Uzbekistan are also suffering from natural gas power plant shutdowns. Experts believe that it is necessary to create an emergency plan for the transition of heating to alternative types of energy.

Just before those emergency situations, officials from Kazakhstan and Uzbekistan made ambitious statements at COP27 in Sharm el Sheikh. Chairwoman of the Senate of the Oliy Majlis Tanzila Narbayeva proposed to create a regional Climate Council which will advocate low carbon development and build renewable energy infrastructure. The Prime Minister of the Republic of Kazakhstan, Alikhan Smailov, said that Kazakhstan is ready to become a regional center for the development of renewable energy sources. But, just after a few days of their proposals thousands of people in both countries are suffering from an energy crisis.

What happened in Kazakhstan?

On November 27, 130 000 people in the Kazakh city of Ekibastuz were left without heating in a 30C° frost. This happened due to an accident at a thermal power plant. On November 28, a state of emergency was declared. In residential buildings, the temperature almost immediately dropped to 9-11C°. Without heaters, the temperature in the apartments even dropped to minus values in a few days.

“The tragedy in Ekibastuz was expected, but no measures were taken either within the framework of social obligations or international ones. In many regions of the country, problems in the housing and communal services sector have now been exposed to a critical point. Why is this happening and what measures should be taken? In order to improve not only the country’s climate policy, but also to increase the living comfort of our citizens, it is necessary, first of all, to recognize the problems and start working on their elimination. This is a high level of wear and tear of heating networks and boiler equipment; the dilapidation of the housing stock of multi-apartment residential buildings and the lack of specialists to simply identify heat losses and eliminate them. Low quality coal. The thermal characteristics of buildings do not meet modern requirements. Low activity of housing stock owners to carry out energy saving measures. As a result, these are large losses of electricity, heat and water in utility networks, which contributes to global climate change. In order for the Low Carbon Development Strategy of our country to become a real document, and not just another formality, it is necessary to develop a national action plan with specific steps and a budget, taking into account the needs of the population to solve problems.”

In Tashkent, the state-owned company responsible for street lighting explained that nighttime lighting of the city’s central streets would be «limited» from 16 November. Moreover, due to the cold weather and the resulting shortage of gas, the authorities of Tashkent have temporarily closed gas filling stations. Since November 9, in all regions, at all automobile gas filling stations, due to a shortage of gas, temporary restrictions on the supply of gas have been introduced.

“Uzbekistan is not ready for winter, it has been snowing for three days already, and there is no gas in the country, especially in wilayats, rural areas. Even in the periphery of the city of Tashkent there is no gas, electricity is cut off, a very deplorable situation. How could all this have been prevented? Firstly, Uzbekistan is rich in gas, half of the cars in our country run on methane, for the time being all methane gas stations have been closed, there are kilometer-long queues on the streets. Uzbekistan, first of all, must provide its population with gas, but we could have switched to alternative types of energy long ago, that is, to provide all residential buildings with solar panels, to allow entrepreneurs to extract methane from garbage, we have huge garbage dumps, so recycling would solve two problems at once. Firstly, the population would be provided with methane gas, and secondly, we would get rid of the garbage that fills the landfills. These landfills are filled with fertile land.”

For Kazakhstan and Uzbekistan, two countries with large populations and large budgets, the main priority is the diversification of the energy sector.

It is important to transform the energy sectors of countries in Central Asia to renewables. It could help vulnerable population disconnected from the central heating systems and the ones experiencing blackouts. The importance of heat pumps, wind farms, rooftop solar panels at households should not be underestimated by regional authorities. As well as energy efficiency measures and insulation. The transition to decentralized energy grid in Central Asia, and to a system in which renewable energy covers most consumption, is a long-term, strategic initiative. It will require wide-ranging, comprehensive change and big investments. Energy security should force the Central Asian authorities to rethink their energy policy and give priority to renewable energy sources.

This article written by:

Communication Manager of CAN EECCA