Press release: Dealing with military and conflict related emissions under the UNFCCC 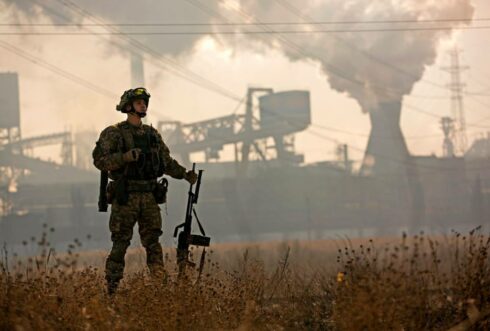 From 24th of February Russian armed forces used more than 200 thousand explosive devices, and 2130 aircraft bombs detonated. It is estimated that during 7 months of Russian invasion of Ukraine brought into the world around 33 mln tons of GHG emissions. In general, greenhouse gas emissions from operations of the military in peacetime and war are significant, reaching up to hundreds of million t CO2.

Today at COP27 representatives of the Governments from Ukraine, Georgia and Moldova, also researchers from various organizations discussed how this, so far ignored, issue can be dealt with under the UNFCCC and the Paris Agreement. At the center of attention was a recently released report by the “Initiative in GHG accounting for war”.

“What happened today at COP was long due. I am proud that while the war is still ongoing, Ukraine is raising such critical questions which would benefit the whole world. We need to have a clear methodology for counting military related emissions under the UNFCCC. We need clear guidelines on how to hold countries accountable for the war that they start. Our collective action in this direction should be aimed at preventing other possible conflicts because the governments would know – there will be consequences. We clearly see how fossil fuel dependencies can fuel the potential of totalitarian regimes of waging long-term wars. The UNFCCC should address this issue and not avoid it, as it is clearly connected to our collective effort of fighting the climate crisis.”

“More than eight months of the large scale of Russian invasion to Ukraine, cost significant damages in particular to infrastructure and environment. Apart from local destruction this war is also impacting the world climate through the extra emissions of carbon dioxide, and other greenhouse gases. More than 2 thousand environmental damages were recorded. 20% of protected areas of Ukraine are under threat. Estimated cost of environmental damage is 36bln Euros”

Olga Gassan-Zade, representative of International Initiative on GHG account of the war

“We assessed refugees, internally displaced people, warfare – actual military actions in Ukraine, as well as military activities in Russia itself, uncontrolled fires due to explosions, emission by destroyed, damaged apartments. We have collected information about movements of refugees of Ukraine internationally and domestically as well. As a result of the movements of refugees around 1,4 mln tonnes of CO2 equivalent have been emitted. We have also made detailed analysis of greenhouse gas emissions on military actions themselves. This included assessments of the impact of troop movements, their fuel consumption and military aircrafts. In total we have estimated within 7 months of the war around 8 mln tons CO2 equivalent have been emitted”.

Nina Tkhilava, the representative from the ministry of Environmental Protection and agriculture of Georgia:

“The recent armed conflict, namely Russia’s unprovoked invasion showed us how much environmental challenges are affected and how complicated it is to collect data and to get access for environmental damage both in conflict areas as well as in occupied areas. Of course it should be noted that Georgia has these kinds of challenges. Our country had to deal with it for decades. There is a fact that the pattern of Russia’s actions and its scenarios against its neighbors are unchangeable and always are the same. Almost 20% of Georgia’s territory is occupied by Russia and of course this is the issue that we cannot get accurate information from those places”.

“How could these emissions be accounted for internationally, and who actually takes responsibility? We can feel significant, real military emissions, but nobody has dealt with it properly. As an outcome of our study, I can clearly say that military emissions both in peacetime and war are relevant international emission sources. They are material, they have numbers compared to emissions of the entire country. Under the UNFCCC, so far there is no procedure of reporting those emissions. There is no robust global estimate of military emissions. We have done a few research about it worldwide. Direct emissions from military operations (vehicles and infrastructure) reach 1% of national emission in the UK and US. Indirect emissions from war related to destruction of carbon sinks, and infrastructure can exceed the direct emissions.” 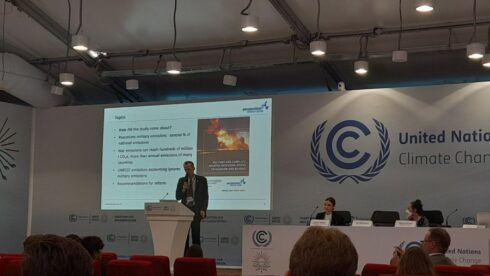 “Until Russia’s invasion of Ukraine military emissions from war were generally absent from media coverage and climate policy makers. War and conflict in Afghanistan, Iraq, Siria, Libya, Palestine, Yemen did not bring attention to this issue. With a bombardment of Ukraine on our TVs everyday we are here, finally to discuss this emission elephant in this room. It also proves that if the governments want to, and have capacity, the emissions from the war can be calculated. We are on a very long way to explore military emissions across the world. Some scientists estimate the militaries and their industry together might emit around 5% of global emissions. This is more than civilian aviation, and shipping combined”. Deborah also mentioned a recent report which helps to understand how the GHG emissions are (not) counted under the UNFCCC processes.

“It is actually fair to split the military emissions between both sides, the country which uses aggression, and the country which uses the army for defense. In our case in Ukraine we need to spend a lot to defend ourselves. On the other hand if Russia acts aggressively toward Ukraine, Russia is responsible for huge amounts of emission and environmental destruction. There is not so much research that we can use to investigate numbers. We don’t have an IPCC methodology, but I already raised this question during the last IPCC session. Also, the technical taskforce on inventories of greenhouse gas emissions already knows about the situation and we have support from UNFCCC. We as country representatives know that UNFCCC encourages reporting military emissions. We heard today that almost 5% of all emissions comes from military actions. So countries should see how Ukraine deals with it and do their part”.