CAN EECCA supports Georgian activists in their struggle against harmful hydropower 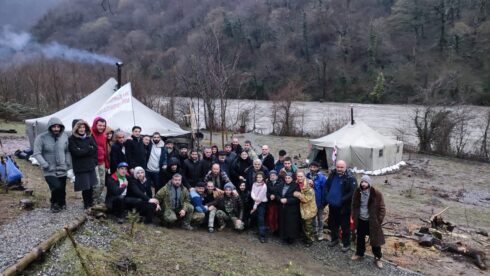 For more than 170 days peaceful protests were going on near the construction site of the Namakhvani Hydro Power Plants (HPP) in Georgia. The local population is worried for their safety, their land and for the biodiversity potential of the territory.

Climate Action Network Eastern Europe, Caucasus and Central Asia (CAN EECCA) is standing in solidarity with it’s Georgian members and the local activists currently protesting the harmful project. We urge you to learn more about the current situation and to spread the word of the civil society for it to be heard outside of Georgia.

Find this statement in the PDF by this link

The main investor of the Namakhvani Hydro Power Plant cascade and 90% shareholder is the Turkish corporation ENKA, the other 10% belongs to Norwegian company “Clean Energy Group». As the investor states on their webpage: It is the largest energy project in the history of Georgia’s independence, which is implemented with a direct foreign investment up to $800 million.

On April 11th the protesters camp was evicted forcefully and since then the activists had to move to a nearby city Kutaisi. As the political situation in Georgia becomes more unstable, the civil society cannot trust the authorities and feels threatened.

Unfortunately, despite numerous appeals to different agencies — the relevant structures of the executive branch of the country, the project investor and the builder have not taken any effective steps to improve the project documentation and EIA, as well as to actually assess the situation and expected risks. This makes the country’s energy independence policy even more opaque and causes mistrust of the local population and CSOs towards these projects.

Why does this matter so much for the Georgian civil society?

This is a matter of international interest. Georgia has ratified Paris agreement and, thus, promised to work for the 1,5 degree goal and protection of its ecosystems. Georgia has also signed an Association agreement with the EU and is supposed to comply with the human rights protection standards, the environmental impact assessment on the level which the EU requires.

The civil society demands are as following:

Georgia has great potential to develop renewable energy sources and receive: wind, solar, geothermal, biomass and waste energy, etc., whose total potential will increase the country’s energy independence and at the same time protect and preserve the unique nature of Georgia. It will also contribute to the safe and sustainable development of local communities.

To realize this potential, the Government of Georgia needs to develop a renewable energy development strategy, which will involve non-governmental organizations along with the local population as one of the stakeholders.