CAN international provided technical, financial, and strategic support to its national and regional campaigners to strengthen their local struggles and campaigns for 100% renewable energy. Campaigning on 100% RE looks very different country to country and requires very different arguments and messages to overcome barriers. This update will shortly introduce the current active campaigns, their adopted approaches, achievements and lessons learnt.

Kenya
In Kenya, our partner, Green Sun Cities, has been campaigning to persuade university campuses in Nairobi to go 100% RE. They have successfully connected with university management and existing student networks to set out the case for adopting renewable energy. The campaign identified key people from each university and invited them to a workshop which explained the significant economic benefits of a transition to renewable energy transition. Strathmore University in Nairobi was able to provide a great case study of its own energy transition, providing feasibility and credibility arguments. As part of a communications strategy developed with support from CAN’s regional communications officer, they have appeared in print, on radio and national television as well as social media. So far, representatives from Kenyatta University and the University of Nairobi have committed to pushing for renewable energy by their campuses. 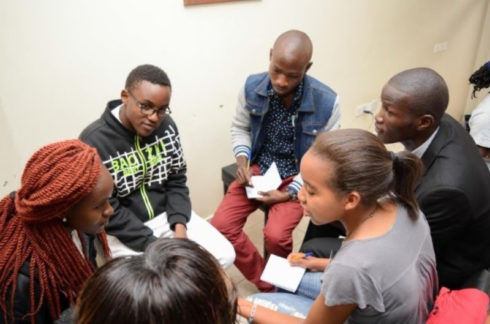 South Africa
Our partner in South Africa, the African Climate Reality Project, is urging the City of Johannesburg totransition to 100% renewable energy. The campaign is targeting city leadership with advocacy and lobbying, while raising public awareness of its goals through radio plays and social media. The Joburg chief of staff and a city councillor have shown some interest in the campaign. Our partners have also set up a billboard campaign in Johannesburg to support the call to transition to 100% RE.

Jordan
Despite the fact that Jordan has made progress in the field of RE, and Jordan’s goal of targeting 7% RE in 2015 and 10% RE in 2030 (2300 MWe), the government’s ambition is very low. Therefore our partner in Jordan (Indyact) is trying to get businesses in Jordan to go 100% RE. They have already managed to meet with a telecommunication company to adopt to 100%RE and they have shown interest in investing in RE. However they are still searching to find more companies to work with. On the side they have decided to move forward with another 100%RE initiative and collaborated with the IEEE chapter in Jordan to build a Solar photovoltaic System for a public School at Gaza Refugee Camp in Jordan. The team has held 4 workshops of more than 12 hours for young Engineers talking about Climate Change, Renewable Energy, Solar PV Systems Installation and Design as well as Energy Efficiency, discussing practical solutions as well as empowering the engineers to take part in the clean energy sector.

Muslim Community
In April 2016 the Global Muslim Climate Network (GMCN) was established and formally launched. It brought unprecedented cooperation to develop a ground-breaking Declaration calling on all Muslims, including governments, businesses, activists and peoples of the Muslim and other faiths to lead the way in the transformation to a fossil-free, RE powered world, whilst also raising awareness within grassroots communities and mosques. As part of its Clean Energy Mosques campaign, the GMCN is calling on every mosque in the world to take concrete measures to reduce its energy consumption and switch its energy source to solar. The network has had many achievements by following a strategy focused on capacity building at grassroots level and empowering Muslim communities around the world. They helped countries such as Jordan and Morocco leading the way in this respect. Four hundred of Jordan’s 6,300 mosques were powered with solar energy last year while Morocco, home to the world’s largest concentrated solar plant, recently announced it is encouraging a staggering 600 mosques to reduce their impact on the environment by 2019, of which 100 will succeed by the end of this year. In 2017 they are working with stockholders to push on the government decision in Indonesia to make the major grand mosques transition to 100% RE, in line with the example set by Morocco and Jordan.

The Philippines
In the Philippines there are two campaigns going on. The first one is in partnership with the Institute for Climate and Sustainable Cities (ICSC) to get Siquijor Island to go 100% RE. As part of their campaign they also aim to create as much media exposure as possible to set an example of how 100%RE is possible as role model to other islands — and the Philippines has over 7,000 of it. They made a submission to the EU Access to Sustainable Energy Programme (ASEP) with the objective to displace at least 30 per cent of the fossil fuel capacity with RE and reach 5,000 households. Our partners managed to gain support from local authorities such as Board of the Province of Siquijor Electric Cooperative (PROSIELCO) for this proposal and are awaiting for the news if they will move to the next round.

Another campaign is with ICLEI Southeast Asia which focuses on transitioning Palwan Island province (so-called Philippines’ last frontier) to 100%RE and to set this as an example of a sustainable model for the Southeast Asian islands. They are working on a draft op-ed article about RE context in the Philippines, what the political, economic and logistical bottlenecks are and how to address these to ensure that the local government can pursue the transition. The partnership team is working with the local authorities on the island and an initial op-ed article about this endeavor will be released by mid-2017.

Indonesia
The 100%RE campaign in Indonesia is aimed at partnering with local faith organizations to get one major mosque in Jakarta to pledge to transition to 100% RE. The campaign is just starting out and the partnership with Global Muslim Climate Network (GMCN) is around strategies to map out, analyze and engage the stakeholders in the world’s largest Muslim nation. The plans include developing a partnership with an existing Eco-Mosques initiative as a response to the 2015 Islamic Declaration on Global Climate Change, and organizing a focused group discussions with stakeholders to link Islamic Teachings and scriptures to the importance of Energy Efficiency in mosques.

Russia
In Russia, Etas NGO is aiming to transit a village to RE in the Arkhangelsk region. The progress has been slow because they have faced challenges as Russian government puts pressure on the civil society organisations. They have had meeting with villagers, local governments and the national park authorities who all are supportive of this initiative. They also cooperate with the Russian innovative energy storage startup to promote decentralised energy systems. They have made a list of all Russian renewable energy providers and have been able to collect data on the equipment needed for their project. Recently they won a grant to transit the first house in the village. This house will also be visited by many local tourists because this village is located in one of the most beautiful northern national parks in Russia — Kenozerskiy. In 2004, the park became a UNESCO Biosphere Reserve. 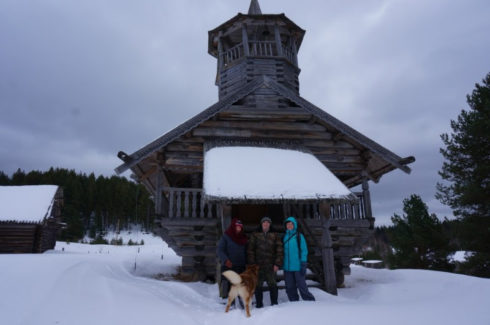 Belarus
In Belarus the campaigning for 100% RE has a very creative approach namely recording a music album using 100% RE. The artists of the Port Mone Band are well known and have been promoting the album, which will be recorded in the Summer, and the use of 100%RE all over Belarus. They already did a few concerts promoting this album including the Earth Hour concert in Minsk. They also did a concert in Turkey promoting the importance of 100%RE for music and love for the planet. A teaser video has been released and a crowdfunding campaign has been set up. There are also plans for a European campaign promotion.

Georgia
Two monasteries (male and female) are the subject of 100%RE campaigning in Georgia. The church is highly respected in Georgia, which makes this campaign very promising. Our partner Gamarjoba NGO has been mainly working on fundraising which has been challenging. Several consultations with energy companies and the monasteries have been useful for developing installation plans. They also had a successful meeting with the religious authorities, who see the RE as a solution to the energy poverty. Due to such a great support from the Church, the campaign may go even further and create a web platform where users can see how many solar energy was generated in different monasteries across Georgia and how much the CO2 emission was reduced. 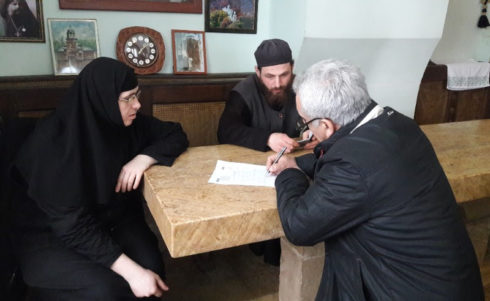 Chile
Chile is known as one of the countries blessed with non-conventional renewable energy sources. With the highest solar radiation and geothermal sources in the north to eolic power and waves towards the south and across the country. Nevertheless, the centralized system, concentrated market, non-clear policies and fossil fuels companies lobbies are still holding back the transition. Therefore, chilean campaign seeks to build a national civil society vision towards a country powered 100% by RE at 2050. Our partner TERRAM, with the support of the CC national civil society roundtable, aims to show that a vast and diverse number of CS organisations believe in the feasibility, need and ethic aspects of the energy transition while raising public attention to the energy discussion. In the beginning of March 2017 the campaign kicked-off looking for CS adhesions all over the country and across sectors, which is not an easy task as RE projects are also controversial given that business models and decision making processes are stuck in outdated ways of operation. Despite that, a phone call could change people’s mind! So far more than 40 organizations have signed the vision which is shown on the majority of the organizational´s web pages of the CC roundtable. On the awareness raising front, an Op-ed was published in a well-known digital outlet and was repurposed by another one on a voluntary basis, which could imply media interest in the debate and the campaign. Also, avery colorful and catchy infographic was promoted on social media. You can help us to spread the word and use #Chile #ER2050 #EsPosible #100ER2050 or use the key message or suggested tweets listed in this docand follow @TerramChile

Brasil
Brazil — país mais grande do mundo — has had social and political hard times during the last years including a scandal with national oil company which has transcended frontiers. The country still relies on oil production as energy source and fosters non- conventional techniques like pre-salt. There are many challenges, but luckily ENGAJAMUNDO our national partner, that mobilizes more than 500 young people all over the country, is there to show that another world is possible, one that is powered 100% by RE. ENGAJAMUNDO works with local hubs in a coordinated and strategically manner. For this campaign, building on the outcomes obtained in the “City of my Dreams” initiative, hubs from Salvador de Bahía, Fortaleza and Belem are organizing local campaigns with young people seeking to target their school authorities for them to pledge to go 100%RE. With workshops to provide tools and strategies to influence public decisions, young people will collectively define their strategy and call for their campaign on the 100% RE frame. Alike, local media work would be put in place to showcase the need and feasibility of energy transition and demonstrate that young generation is committed to it. To improve communications work, a metanarrative has been developed to ensure alignment of local campaigns, and meetings with strategic partners found place to look for more support (e.g. AVAZZ committing to support with local petitions).

CAN international will continue pushing hard for mainstreaming  and pledges on 100% RE to create a transition to 100%RE as a way towards decarbonisation and a prerequisite for limiting global warming to  <1.5 C. Do you want to start your own campaign to get your city / local business / university / to transition to 100% renewable energy? Have a look at our website  http://transitioninaction.org/ . Here you can find more information, fact sheets,  stories, resources such as our Renewable Energy campaign starter guide. If you have any queries,ideas or don’t know where to begin, just drop an e-mail to 100re-support@climatenetwork.org and we will get back to you.