Why is there no climate justice without human rights in the EECCA region? 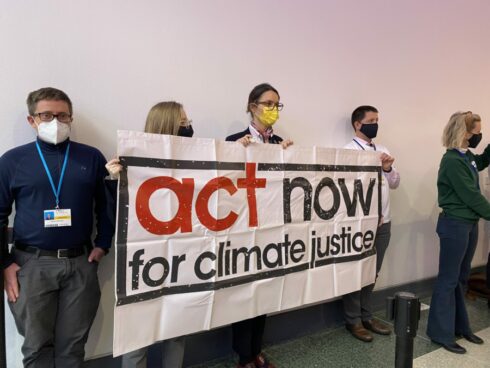 The climate summit COP27 wrapped up in Egypt with the #NoClimateJusticeWithoutHumanRights slogan in a country where an estimated 60,000 people are jailed because of political reasons. Human rights and climate change are linked to each other as fundamental rights for health, livelihoods and decent work, adequate housing, and ultimately the right to life itself are being violated due to climate change consequences. The most affected are those who contributed and profited the least from the fossil fuel industry.

On Day 8 of COP27 Egypt was awarded the Fossil of the Day award as its presidency issued a cover decision draft text but failed to include the call for an equitable phase-out of all fossil fuels in it. Fair and inclusive solutions to climate change are impossible without strong civil societies. Human rights activists from Egypt worked closely together with climate activists showing how intertwined their struggles are. Currently, the right to freedom of expression, peaceful assembly, association, and public participation are in ongoing violation in Egypt. There is no effective way for civil society activists to confluence a country’s climate or any other policies. As a result, the business and the government are making all the decisions, leaving out the voice of the population. Policies created in such a way will never be inclusive or sustainable.

A similar situation is true for many countries of the Global South. The countries of Eastern Europe, Caucasus, and Central Asia were historically left out of the “Global North VS Global South” narrative. Meanwhile, at least half of the EECCA countries are historically small emitters and at the same time very vulnerable to climate change. And the level of ambition of climate policy has a lot to do with how strong the influence of civil society is in that particular country.

In Kyrgyzstan, the new proposed legislation on NGOs limits funding received from international donors which can negatively affect the work of local activists including those in the climate change sector. However, recently Kyrgyzstan became the first state in the region of Eastern Europe, Central Asia, and the Caucasus to join the Climate Vulnerable Forum (CVF). This is the result of civil society`s effort and years of advocacy. If civil society is going to be further restricted, the government and business will weaken a very strong ally and will feel the negative consequences too. Many international green funding institutions are starting to pay much closer attention to the state of civil society in the country where they invest in climate activities and resilience. They are open to feedback in case there are complaints regarding the way the money is spent or concert about lack of input from the communities and NGOs.

This COP27 not only had human rights in Egypt as a red thread but also, the impacts of the full-scale Russian war in Ukraine on the global climate agenda. The war violates many International Laws (including the Charter of the United Nations) and the environmental costs of war are appalling, harming people and wildlife after decades. Ukrainian environmental groups are keeping track of the damage and according to recent data the war caused around 33 million tons of climate pollution. Some experts consider it a war crime eligible for environmental reparations.

The EECCA region countries are finding their own independent voice at international conferences like COP. They are leaving the Soviet past behind and looking for their unique way forward. Countries like Armenia, Georgia, Kyrgyzstan, and Tajikistan are stressing how vulnerable they are to climate crisis despite not being included in the typical “Global South” geography. This is true, however, the vulnerable countries of the EECCA region need to understand that there will be no effective and stable climate finance or long-term international solidarity with them if the human rights and mechanisms for civil society participation are not guaranteed.