Today, on August 22, 2017, within the framework of the Climate Forum of the Russian Cities in Moscow, a Round Table “Why cities shall become climate leaders?” is going to be held. During the discussion, experts from Russia, Belarus and Kazakhstan will present their experiences in promoting climate resilience actions in the cities and discuss the role of cities in our region to pioneer on the global fight against climate change.

The changing climate is creating growing issues for the cities in the context of rapid urbanization. Today, more than half of people live in cities, and, according to UN estimates, by 2030 the share of urban population can increase to two thirds of the world population. This trend towards greater “compactness” of resettlement creates an excellent opportunity for more effective reduction of greenhouse gas emissions and integrated adaptation to climate change in cities. Thus, the most dirty and densely populated places of the planet can become places of its salvation.

Svetlana Romanko, a 350.org Campaigner for Climate Solutions in the Eastern Europe, Caucasus and Central Asia (EECCA) region, will share the experience of the international organization in the region. One of its main directions is not only the development and support of the climate movement, but also campaigns to develop and implement climate solutions by the city’s active residents, communities, initiative groups and NGOs. For example, the first phase of the “Cities for Life” campaign was launched recently, aimed at creating a platform for climate initiatives and interaction with the authorities to develop climate strategies in the cities of the region. Local climate solutions express an acute public demand for “cities for life” or “smart cities” and measures to reduce greenhouse gas emissions, use of renewable energy (RE), the creation of innovative urban spaces and green spaces, and create convenient public and bicycle transport infrastructure.

“The Climate Forum in Moscow is the first forum in the region of a similar scope and level, devoted to understanding the problem of climate change and the related challenges in the cities, and the need to develop actions for climate-friendly environment in the cities”, Svetlana comments. “The public can and should influence climate solutions jointly with government bodies and business representatives.” 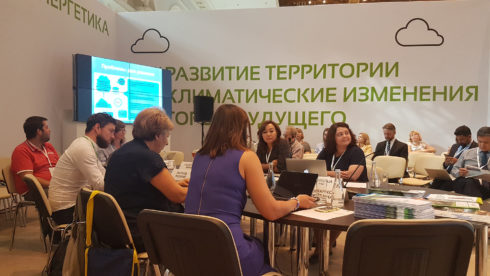 The first step to transition towards a city for sustainable development in a changing climate should be the adoption of a climate plan. “The climate action plan can become an important document for the development of the city, combining innovative actions in the field of energy efficiency and green energy, and adaptation measures to improve the city environment, comfort and health of citizens,” explains Olga Senova, Head of the Climate Secretariat of the Russian Socio-Ecological Union. “The mission of the public is to represent the interests of citizens and to promote the participation of the population in the preparation and implementation of the climate plan.”

According to Greenpeace Russia, the introduction of climate solutions packages in cities is a win-win strategy in every sense, because they will work not only for the benefit of the climate, but also will reduce air pollution. If city dwellers realize the threat of climate change, the air poisoned with exhaust gases is hard not to feel. To visualize the situation, Greenpeace launched an interactive map of air pollution in Moscow. “According to opinion polls, air pollution is one of the most disturbing environmental problems for Russians,” says Vasily Yablokov, head of research projects at Greenpeace Russia.

Sustainable Urban Mobility Plans can become one of the documents of local planning that contribute to the transition of cities to low-carbon development. In Kazakhstan, the experts of the “Socio-Ecological Fund” Public Fund (NGO) prepared a Guide for local governments to develop such plans on the basis of the concept of the European Union, taking account the local conditions.  “We have worked in the two pilot cities in Kazakhstan to come up with a possible draft SUMP. It’s important to work on improving the awareness of the key stakeholders to ensure long-term sustainable mobility solutions. The cities have great potential to cut carbon emissions in the municipal sectors. They can and should become leaders in climate movement similar to the cities throughout the world, and start improving the lives of people already now”, says Elina Doszhanova, a low-carbon development expert.

According to Mariya Falaleyeva, deputy chair of ECOPROEKT in Belarus and an Irish expert from EVRESCO, adaptation planning absolutely requires experimenting as a tool, whereas the local initiative and cooperation are prerequisites. “Climate models can be improved but will never yield absolute forecasts. Thus local leadership becomes crucial in promoting climate leadership. The national laws have to provide possibilities for such initiatives. Climate adaptation is a new aspect of risk management, related to finance, social wellbeing, and environmental safety.”

Among the regional challenges for sustainable climate future experts mentioned the lack of due attention from the decision-makers, insufficient funding, lack of specific laws in response to climate change, low awareness of the population. Thus, climate leadership of all stakeholders is strongly needed to enable the transition to climate resilience in the cities of the EECCA region.

Inna Indutnaya, a coordinator on engagement of the 350.org regional EECCA office, comments: “The experience of the Cities for life campaign by the 350.org in St. Petersburg, Mogilev and Kiev shows the importance of mobilizing and engagement of the local communities, activists in the process of local planning and decision making. Together only can we make our cities more sustainable and resilient for climate change”.

More information in Russian about the Climate forum of the Cities of Russia is available at climate-forum.ru.