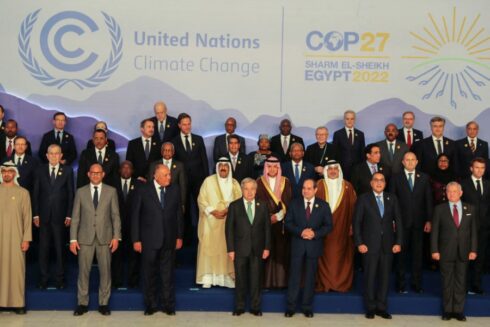 World leaders and diplomats framed the fight against global warming as a battle for human survival during opening speeches at the COP27 climate summit in Egypt on Monday.

The head of the United Nations, Antonio Guterres declared that a lack of progress so far had the world speeding down a “highway to hell”. “Humanity has a choice: cooperate or perish,” U.N. Secretary General urged to accelerate the transition from fossil fuels and speed funding to poorer countries struggling under climate impacts that have already occurred.

French President Emmanuel Macron said that, while the world was distracted by a confluence of global crises, it was important not to sacrifice national commitments to fight climate change.

“We will not sacrifice our commitments to the climate due to the Russian threat in terms of energy,” Macron said, “so all countries must continue to uphold all their commitments.”

British Prime Minister Rishi Sunak said the war was a reason to accelerate efforts to wean the world off fossil fuels.

“Climate security goes hand in hand with energy security, Putin’s abhorrent war in Ukraine, and rising energy prices across the world are not a reason to go slow on climate change. They are a reason to act faster,” he said.

COP is a very important platform for the 11 countries in the EECCA region to declare their plans for climate policy, and to remind the world about their vulnerability to the climate crisis. We followed the Leaders Summit closely and want to share the highlights with you.

The Ukrainian president, Volodymyr Zelenskiy, has told world leaders they will not be able to tackle the climate crisis unless Russia’s invasion of his country ends. “There can be no effective climate policy without peace,” he said in a video address at the Cop27 UN climate summit in Egypt. “The Russian war has brought about an energy crisis that has forced dozens of countries to resume coal-fired power generation in order to lower energy prices for their people, to lower prices that are shockingly rising due to deliberate Russian actions.”

“Ukraine has come to COP27 with some very ambitious goals. We are in multiple fights at the same time – fighting for existence, for day-to-day energy supply and ensuring climate commitments are brought to the future green recovery. In his speech Zelensky mentioned an initiative which Ukraine brought to this COP – assessing the effects of the military industry on climate. This could be the beginning of addressing a big scary elephant in the room and I welcome Ukraine’s leadership on that. Meanwhile, while talking about long term climate commitments of Ukraine we need to make sure we don’t entangle ourselves in the false solutions like nuclear energy, which will distract a huge amount of money and time away from the renewable energy solutions”.

Prime minister of Kazakhstan, Alikhan Smailov reminded about the countries’ commitment to become climate neutral till 2060. To do this, Kazakhstan is planning to adopt the Low carbon development strategy by the end of this year. Currently green energy represents only 3% of the country’s energy supply. The planned goal by 2030 – 15% of green energy. Kazakhstan also plans to become one of the 10 largest hydrogen exporters. As well as allow for extraction of important metals on its territory.

“In his speech Prime Minister of Kazakhstan Alikhan Smailov emphasized that by the end of this year, Kazakhstan will adopt a Low-Carbon Development Strategy. He also voiced a bold proposal to act as a regional center for the development of renewable energy sources. But some questions arise, how well is this strategy developed? Will there be a valid working document, or will it remain just another formality? Will it be widely discussed with the public? To become a regional center for the development of RES, it is not enough to create one demonstrative high-cost project. We need specific and targeted actions – support for renewable energy, replacement of coal, water conservation, etc.”

Georgian prime minister Irakli Garibashvili said that Georgia  has one of the cleanest grids; 85% of our electricity comes from renewable sources, and further enhancing the share of renewable energy is a strategic priority for the country. He also mentioned that Georgia, with its Long-Term Low Emission Development Strategy, intends to reach carbon neutrality by 2050 with unifying national efforts and with international support.

Davit Sidamonidze, International coordinator at Friends of the Earth, Georgia: “85% of energy is indeed renewable, but unfortunately it is mostly hydro power, that becomes less and less efficient because of climate change, that causes changing water regimes, less and less glaciers, etc. Also, big hydro power plants are damaging biodiversity and the local communities’ living environment. Therefore more attention has to be given to solar, geothermal and wind energy, that has to come with energy efficiency. But where are they? Since the independence from the Soviet Union several modeling projects were implemented, they proved the efficiency of wind and solar energy in Georgia. But still most attention is going to hydro energy, which is always causing massive protests from civil society and local communities. Georgia has adopted many international agreements and prepared many accompanying documents, including NDC, but civil society considers it less ambitious. More practical actions are needed to fully fill global targets. Georgia has to increase its ambition as it was mentioned by the PM as well that it is not time to talk about climate change, it is time to act. Therefore more actions, more international technical support will suit the process.”

President of Armenia, Vahagn Khachaturyan gave a speech saying: “Our country has recorded 1,3 degree increase of average temperature and 9% decrees in precipitation making it one of the most vulnerable countries to climate change.” He added: “We are well aware of the negative impact of wars on the ecosystems. Despite the challenges existing in Armenia, the climate change agenda remains a priority for our government. Particularly climate resilience and low carbon development.” Mr Khachaturyan also mentioned Armenia plans to continue developing nuclear energy.

Our member, head of the NGO “Khazer”, Amalia Ambartsumian mentioned a trick which the Armenian NDC uses: “If you do not note in relation to the emissions of which year the number is given, then the listener (or reader), naturally, may get the impression that the target is very ambitious in relation to current emissions. In fact, the NDC of Armenia provides for a “reduction greenhouse gas emissions by 40 percent by 2030 compared to 1990 levels”, which means nothing more than an increase in emissions by 50% compared to current emissions (in 1990, emissions from Armenia were 25 million tons, and the current ones are about 10 million tons per year).”

Mr Emomali Rahmon, president of Tajikistan reminded us that the country is basically 93% mountains and therefore highly vulnerable to climate change. Over 98% of the energy in Tajikistan is generated by hydropower. The glaciers, including the rapidly melting ones in Kyrgyzstan play a key role in water resilience for the country. Mr Rakhmon suggested announcing 2025 as the international year of glacier protection.

Timur Idirisov NGO Little Earth Tajikistan: “We believe that the authorities need to pay special attention to programs that improve energy efficiency and energy saving, and the development of alternative energy sources, in particular, solar energy. Given the growing risks, it is also important for Tajikistan to significantly strengthen measures to adapt key sectors of the economy and the most vulnerable local communities to the effects of climate change. For this, it is especially important to preserve and restore natural ecosystems, recognizing their primary role in maintaining climate stability and the well-being of the inhabitants of the republic. We also want to emphasize that the climate policy in Tajikistan should be based on the principles of inclusiveness and transparency in order to increase trust, sustainability and reliability of decisions made.”