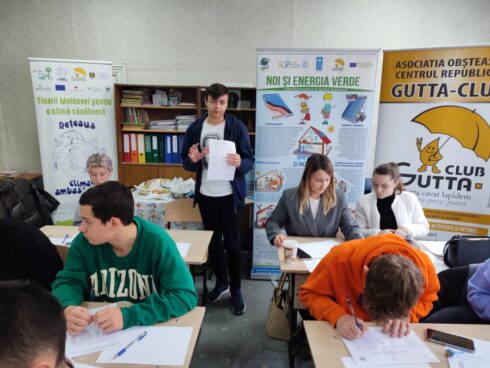 From November 5 to November 18, members of CAN EECCA from Moldova, Centrul Republican «Gutta-Club» prepared and held a number of thematic events under the general title «Climate is changing. And you?», with the support of the largest European network of youth environmental organizations YEE (Youth and Environment Europe), of which Gutta-Club has been a member for more than ten years.

On November 5, students of the local high schools, as well as students of State, Technical, Pedagogical Universities and the Economic Academy attended to a training for youth environmental activists.

Students represented a presentation on the problems of excessive consumption, and also offered the participants to take a test to determine their ecological footprint.

“If we are talking about young people, our target group, the role of environmental education and upbringing cannot be overestimated. Substantiated, scientific information, presented in an interactive form, should inspire young people to take concrete actions in defense of Nature and society. At our climate training, the guys got the latest data on Moldova, calculated their ecological footprint, developed and defended climate startups and wanted to move from talking to deeds. A week later, trees were already planted on the banks of the Dniester River and in the park area of the Chisinau municipality. We think and act locally.” – said Natalia Kravchuk, head of the Gutta-Club.

And on November 18, the Gutta-Club delegation, with Yaroslav Rudenko, Olya Sovko Arina Manzul, left for Bakuriani (Georgia) to participate in the international seminar «Let’s connect» under the EU Erasmus program, where, together with 24 youth activists from Armenia, Georgia, Spain, Portugal, Ukraine, Turkey and Bulgaria. They presented the successful experience of the Gutta-Club’s long-term activities, including climate projects, educational interactive forms of work with young people, exchange ideas, and establish partnerships.