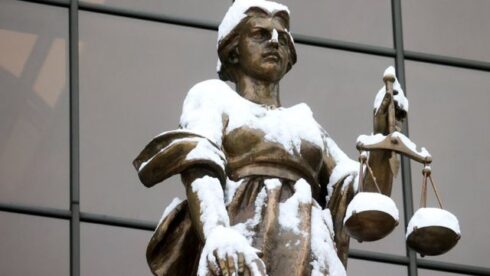 The first-ever climate case in Russia was filed before the Supreme Court of the Russian Federation, demanding the Russian authorities take measures to reduce greenhouse gas emissions necessary to keep the global average temperature rise at 1.5 °C above pre-industrial levels. This will save the lives of hundreds of thousands of people who may die due to climate change in the coming decades if Russia does not fulfill its international obligations under the Paris Agreement.

The case is brought by a diverse group of Russian citizens. Among the plaintiffs are Fridays For Future activists Arshak Makichyan, Asya Fomina, and Daria Anufrieva, co-chair of the NGO Ecodefense, winner of The Right Livelihood Award 2021 Vladimir Slivyak, and co-chair of the Russian Socio-Ecological Union Vitaly Servetnik, defenders of the rights of the Saami, Udege and Itelmen indigenous peoples Andrey Danilov, Pavel Sulyandziga and Dmitry Berezhkov, and the Moscow Helsinki Group, Russia’s oldest human rights organization.

The group faces considerable risks in bringing such a claim against a background of ever-increasing oppressive domestic measures which have been wielded to silence opposition and civil society voices over many years and increasingly so in recent months.

The difficulties are heightened by the inevitable overlap between the issues raised by Russia’s war in Ukraine and the inadequacy of Russia’s approach to climate change to the extent that recent reports allege Russia to be burning £8 million of gas a day. Many climate activists are also anti-war activists in a country where it is now a criminal offense to even describe Russian actions in Ukraine as a ‘war’ or ‘invasion’ and some are already paying a heavy price for their uncompromising bravery.

Russia is the fourth country in the world in terms of greenhouse gas emissions. At the same time, the average temperature in the country is rising twice as much as the world average. To keep the global average temperature rise at 1.5°C (with a 66% probability) and meet its obligations under the Paris Agreement, Russia must reduce greenhouse gas emissions to 31% of 1990 levels (to 968 million tons of CO2) by 2030) and up to 5% by 2050 (up to 157 million tons).

However, according to the strategy officially adopted by the Russian authorities, by 2030 CO2 emissions will increase to 2212 million tons. By 2050, it is planned to reduce emissions to only 1,830 million tons. This scenario would result in a 4°C increase in the global average temperature. According to some studies, this could lead to at least 710,000 excess deaths.

By not taking sufficient measures to reduce greenhouse gas emissions, the Russian authorities are violating the Russian Constitution and the European Convention on Human Rights, to which Russia remains a party until September 16 this year. Perhaps this court case will be one of the last in which the ECtHR will be able to issue a binding decision and protect the rights of Russian citizens.

In addition, in July of this year, Russia abstained from voting on a UN resolution for the “Human Right to a Clean, Healthy and Sustainable Environment”.

Lawyer of the Institute of Law and Public Policy Grigory Vaypan commented to CAN EECCA mechanisms for considering a claim:

“This is the first climate lawsuit in Russia, but there are already successful precedents elsewhere where courts have ordered governments to adopt more ambitious targets to reduce greenhouse gas emissions. Legally, the Supreme Court has every reason to accept such a claim, consider it in a public trial and satisfy it. The court has three days to decide whether to accept the claim. If the claim is not accepted or if the court recognizes the disputed documents as legitimate, then we will be able to apply to the European Court of Human Rights (ECHR) — the claim was filed during the period of the Convention on Human Rights in relation to Russia, which means that this issue may become the subject of study by the ECHR”.