April 2020 saw the emergence of the Green Just Recovery movement in the world. This movement stands for the economic recovery of countries after the COVID-19 pandemic, which, according to environmental experts and activists, should not lead to worsening of inequality and increase in greenhouse gas emissions.

In the mid-2020, none of the countries of Eastern Europe, Caucasus and Central Asia (EECCA) adopted the principles of sustainable development and green economy as the basis for recovery from the pandemic. Moreover, the government program of Ukraine contained a thesis on “preventing the establishment of overestimated national targets to reduce CO2 emissions”. 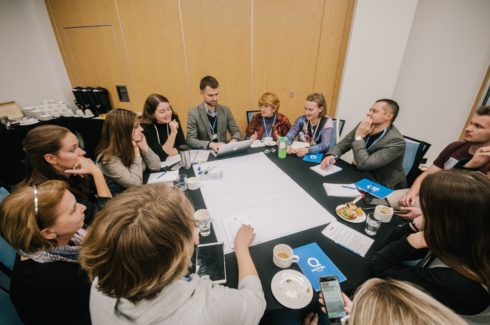 In May, during the conference “Climate Dialogue: Green Recovery in the Eastern Partnership Countries” Noemie Leprince-Ringuet from the World Resource Institute stressed that “Chile and Rwanda presented their national contributions in the midst of the health crisis while other countries are using pandemic as an excuse to slow down their climate actions”.

Another important topic of this year was the limitation of the society’s influence on decision-making. According to the research, there is already a number of measures in the post-Soviet space which prevent active civil society from participating in decision-making, namely repressive legislation, threats of legal sanctions and lawsuits, undermining reputation, black PR in the media, and physical violence. The pandemic has only exacerbated advocacy possibilities for civil activists by taking away their ability to attend rallies and communicate directly with government officials.

So why do the post-Soviet countries not hurry to raise their climate ambitions, follow up the global green economy trends, and strengthen their cooperation with civil society organizations?

Working with the international Climate Action Network (CAN), one can observe the extent to which the approaches to advocacy differ among its regional divisions. The model used by strong organizations in the “global north” is the following: challenge politicians, demand more from them, and you will achieve something. Unfortunately, in the countries where democracy is still developing and where politics is still settling, this approach is usually doomed to fail.

According to Sanjay Vashist, coordinator of CAN in South Asia (CANSA), in countries like India, when one starts challenging decision-makers, they shut down. They will use their codes of rules and their social status to protect themselves, and that is it. This is the end of advocacy. Nevertheless, the CANSA network of South Asian NGOs constantly uses advocacy as a tool and successfully influences the authorities. How do they do that?

Activism is about changing existing systems of power, influencing people who misuse it, and showing alternatives. However, how can one influence the system living in one of the post-Soviet countries? Advocacy in developing democracies assumes flexibility of approaches and careful persistence. Of course, there is no “one-size-fits-all” approach that will guarantee you a successful campaign and a change in the country’s course on climate policy, but it is important to analyse available opportunities.

There is a gap between developing a policy and making specific plans. Usually, the former are developed at the national level, but the mandate for their implementation is at the local level. Transformation of policies into specific action plans requires technical know-how, and civil society organizations can play a crucial role here if they have such capacity. Of course, to have such potential, it is necessary to constantly develop it and use national, regional, and international resources for it.

2. Public criticism may not be the best strategy for starting a dialogue. We are running the risk of simply closing the doors that we were trying to open. It is better to try to cooperate.

Shaming and blaming does not always work. Since democratic institutions are still developing in many post-Soviet countries, public criticism may not be the best strategy for starting a dialogue. We are running the risk of simply closing the doors that we were trying to open. In some cultures, criticism may even cause a desire for revenge. The best strategy would be to try to work together, to show that you are ready to help.

The approach can be described as follows: “If you’re doing a good job, we are supporting you. If you make a mistake, we are ready to find common solutions. However, if you have a personal vested interest, we will have to openly point it out”.

3. We must be prepared to speak the language of the person we are meeting. Climate change can mean different things to different people; therefore, to have better communication try to keep your arguments as local as possible, outlining specific implications and challenges. Start a conversation with air or water pollution, focus on stories about food, farmers, and nature, and then gradually move on to the climate change itself.

4. Don’t be shy. Meet people in person, because even with a change of government these connections will help you to establish new ones faster. Do not be afraid to remind about yourself, talk about the work you are doing, in order to inform rather than demand. If you are doing research or opinion polling, make sure those are sent to the appropriate institutions.

This year, members of CAN EECCA network released a statement on Green Recovery and Climate Action in Central Asia. This is an example of how society can start a dialogue with authorities. In addition, with support from various partners, research on the ways of society engagement in climate policy were conducted for Ukraine, Georgia and Kyrgyzstan. The results of such studies should be communicated to decision-makers and referenced in communication.

The extent to which a country is ready to take leadership in climate policy is inextricably linked to the level of development of democracy and civil society. The climate crisis is a challenge that goes far beyond the borders of one country. Decisions made behind closed doors by a limited number of people will not lead to quality, fair and sustainable changes that are very much needed.

On December 12, the world celebrated the fifth anniversary of the Paris Agreement signing. The release of the “Climate Policy Overview for Eastern Europe, Caucasus and Central Asia” prepared by the CAN EECCA network was timed to this date. It is not surprising that the first five years after the historic signing showed neither declarative ambitions nor actual reductions in greenhouse gas emissions in the EECCA region. The post-Soviet countries have a lot of work ahead of them to achieve climate goals and strengthen democratic structures. It is obvious that no social change is possible without the participation of the society itself, that is the public.

The original article was written by Olha Boiko and published in the IPG journal in Russian.