Ministerial take on the Future Energy

The representatives from the Ministries of Energy of Russia, Saudi Arabia, Kazakhstan, Malaysia, Afghanistan, Greece, Ukraine and many other countries met at the Ministerial Conference and International Forum on Energy for Sustainable Development. The civil society was expecting to hear statements about how the countries would develop solar and wind power generation, but instead they were told the old stories, saying that «renewable energy is expensive» and that «fossils will continue to dominate the energy mix for a great while.»

In his opening speech Kanat Bozumbayev, Kazakh Minister of Energy,, said that the energy industry is responsible for 65% of total greenhouse gas emissions, and emphasised the need for urgent transformation and decarbonisation of the economy to limit global warming to 2 °C in accordance with the Paris Agreement. He however mentioned that 15% of the Kazakh GDP comes from the fossil fuel and that fossils would dominate in the global energy system for a long time.

«In Kazakhstan, the current share of renewables has reached one percent of total power consumption,» — said Vadim Ni, Chair of Kazakh NGOs Ecoforum. «But the share of renewables is expected to increase to 5%, according to the Strategic Development Plan 2020. Additional measures are required to achieve the target set and the action plan to reach the national target and implement the Paris Agreement, including in the area of renewables and energy efficiency, and relaunch the emission trading scheme that has been put on hold.»

In the pavilion of nearly a square kilometre in size, Russia promotes nuclear energy and the production of energy resources in the Arctic Regions as sustainable solutions for the green future, however dangerous and expensive they are. Aleksandr Novak, Russian Energy Minister, said that no sustainable power sector would be possible without nuclear energy. «An increased competition between fuels is apparent, but this trend is evolutionary rather than a revolutionary one. Renewables are still expensive and uncompetitive,» he said.

But Vladimir Sliviak, a co-chair of Ecodefense, refutes that statement: сопредседатель «Экозащиты!» Владимир Сливяк: «Russia is actively promoting expensive and unsafe nuclear power. A new advertising strategy for selling reactors involves convincing the prospective customers that the nuclear is environment-friendly and beneficial to the climate. Effectively, this is another attempt to sell an obsolete and unreliable technology rooted in the 20th century, but this time in new appearance and several-fold more expensive. Neither the nuclear waste, nor the NPP disaster-related problems are conclusively sold. There is no more expensive and inadequate approach than using the nuclear power to limit the climate change. The energy of the future can be achieved with renewables and energy efficiency only. Those are independent of fuel prices and do no harm to humans and the environment.».

«The issue is highly controversial, said V. Chuprov, Greenpeace Russia. . — It is impossible to develop fossil and nuclear power sectors while promoting green energy, as the Russian installation in Astana suggests. If we look through official documents, we will find out that renewable energy is actually out of the question. One might as well say that the Russian delegation in Astana tributed to the fashion in contrast to other countries that take renewables seriously. But the good news is that Russia do not internationally perceive renewables as a weapon against Russia or a mere toy in the hands of rich nations. We can take it as an achievement that Russia can be proud of.» 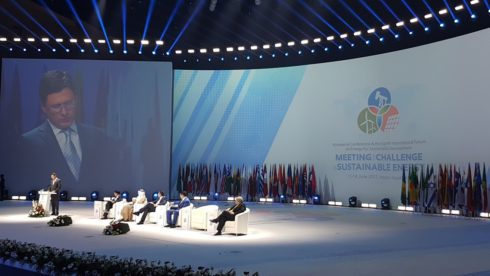 One of the positive results of this event was the publication of the Communiqué on accelerating renewable energy deployment between the countries of Central Asia and the International Renewable Energy Agency (IRENA).

«Covering over four million square kilometres, the countries of Central Asia are endowed with rich renewable energy sources that can drive sustainable economic development and growth,» said IRENA Director-General Adnan Z. Amin.. «With renewable energy targets in place for 2020 and beyond, the region can now seize this opportunity for a sustainable energy future, and the new Action Plan will help boost efforts of renewable energy uptake».

Irina Stavchuk, a CAN EECCA coordinator: «The EECCA countries are extremely exposed to the climate change. Mountain glaciers melt, reducing the hydropotential of the countries and the population’s access to fresh water in Central Asia. Droughts and extreme weather events are becoming increasingly common. All EECCA countries should show their commitment to reduce greenhouse gas emissions and start using the potential of renewable resources actively.»

Ukraine is one of the few nations that have presented their current achievements in the use of renewable energy sources. Ukraine set 11% renewables target by 2020. 120 MWt of green generating capacities were installed in the country in 2016, which is four times as much as in 2015. For example, a 200 MWt wind generation project has been implemented recently. The investments in the project totalled EUR 340 million and the current price of electricity is EUR 0.11 per 1 kWh.

But Ukraine’s national greenhouse gas emissions reduction targets are too low.  «Ukraine’s national emission reduction contributions (INDCs) allow, in fact, the emissions to increase virtually two-fold compared to the existing level,» explained Ilia Yeremenko, Chair of Ukrainian Climate Network. «The country’s obligations arising from the EU Association Agreement and the membership of the Energy Community produce an incomparably greater impact on the energy policy than INDCs. The performance of the said obligations will allow a significant reduction in greenhouse gas emissions. We therefore cast doubt on whether it is reasonable to submit INDCs that are much less effective than other obligations of the country. The last six months have seen an observable progress in the alignment of the national energy and climate policies. Will hope that this trend continues and new INDCs reflect actual commitments.». 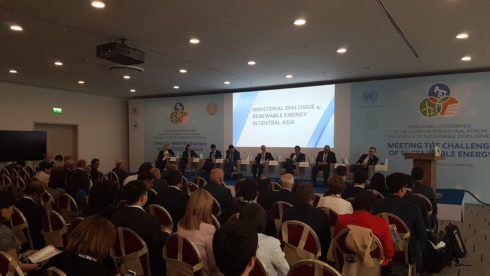 The Ministerial Meeting culminated in the Statement on access to affordable, reliable, sustainable, and modern energy, prescribing to establish an International Centre for Renewables Development in Astana.

«The experience of «Cities for Life», a ten month international campaign run by 350.org and local non-governmental organisations from EECCA countries, as well as «Action Days» that were held recently in five countries of the region, shows that the development of climate strategies for cities (and the performance of obligations under the Mayors Climate Protection Agreement) requires not only the existence of applicable law, comprehensive strategy and political will, but also the understanding of the problem and support from city residents, local government authorities, businesses, and investors. What also really matters is that government authorities are willing to establish task forces, allocate resources and pass effective instruments rather than declarative ones. To achieve this, an economic tool encouraging the energy transition towards renewables should be developed first,» said Svetlana Romanenko, a 350.org EECCA coordinator.

«According to CLEEN, a network incorporating 30 NGOs from four countries, the central governments should cooperate with local authorities assigning them complex and challenging tasks while creating proper conditions to perform the same, if they want to achieve a sustainable energy development. The participation of cities in the Mayor Agreement — a EU’s initiative — is one of the stunning examples where improvement is needed. Unfortunately, sustainable economic development action plans of cities lack — on multiple occasions — commitments to reduce current emissions. The governments should take measures as may be necessary to strengthen importantly the commitments of cities under sustainable development action plans, including through the involvement of the public which can play a crucial role in this process,'» said Andrey Martyniuk, a CLEEN network coordinator in Ukraine.