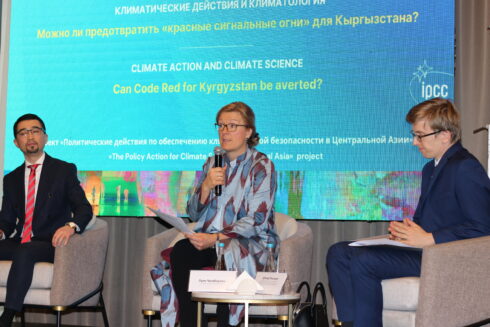 Bishkek – March 19, 2022 – A national discussion “Climate Action and Climate Science: Can Code Red for Kyrgyzstan be averted?” took place to discuss the recently published Sixth Assessment Report (AR6) of the Intergovernmental Panel on Climate Change (IPCC), which is the most comprehensive assessment of climate change to date. The discussion was attended by the expert community, scientists, university teachers and students, representatives of the Cabinet of Ministers of the Kyrgyz Republic, other government agencies, representatives of the diplomatic corps, international organizations and the donor community accredited in the Kyrgyz Republic, representatives of non-governmental organizations, media representatives, as well as international experts from the UNDP, UNFCCC, UNEP and UNESCO.

The recently released IPCC Sixth Assessment Report (AR6), which is the most comprehensive assessment of climate change to date, makes it clear that the unprecedented and irrevocable climate crisis is here, that global warming is human-induced, and that we are getting dangerously close to 1.5 degrees Celsius of warming, meaning that we are approaching the irreversible tipping points. These findings present a “code red for humanity”, as stated by UN Secretary-General, Antonio Guterres.

Director of the Climate Finance Center under the Ministry of natural resources, environment and technical supervision of the Kyrgyz Republic Dastan Abdyldaev during the discussion emphasized  that Kyrgyzstan has developed a climate investment program to mobilize and attract funding for climate change adaptation in key economic sectors: “The delegation of Kyrgyzstan presented its Nationally Determined Contribution (NDC) at the 26th session of the Conference of the Parties to the United Nations Framework Convention on Climate Change in Glasgow, within which we, as a country, set ambitious goals for ourselves taking into account the recommendations, including the IPCC Report.”

UNDP Resident Representative in Kyrgyzstan Louise Chamberlain, noted: “In this time of a climate and environmental emergency of planetary scale, it is time for scientists and educators to speak up. We still remain with a short window to prevent the worst potential impacts of climate change by taking urgent action to reduce GHG emissions. We call for a more active role of science to inform key policy decisions in relation to NDCs by providing the key evidence and helping attract support for necessary actions.” 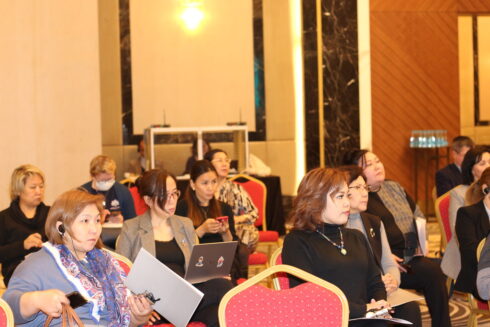 “The Glasgow Climate Pact agreed at COP 26 demonstrated significant ambition to tackle climate change from across the globe. We now need to turn the pledges made in Glasgow into action, building on the latest evidence including from this IPCC report. During our COP26 presidency in 2022, the UK will follow up on COP26 priorities, and will for example aim to work with all development partners to double adaptation finance. All of this will be key for Kyrgyzstan to translate their NDC ambition into action this year, too,” said David Rinnert, Deputy Development Director at the UK Foreign, Commonwealth and Development Office (FCDO).

Chief Scientific Secretary of the National Academy of Sciences of the Kyrgyz Republic Bekmamat Dzhenbaev stressed the undeniable importance of the role of science in achieving the climate goals of Kyrgyzstan: “The role of science is becoming crucial to ensure that Kyrgyzstan’s climate commitments contribute to the overall efforts to curb global temperature rise within 1.5 degrees Celsius. We have certain negative impacts of climate change in our country, and ambitious and accelerated adaptation actions are needed. Thanks to the IPCC Report, climate change science guides policy and legislation at the international level and promotes consensus among governments.”

According to the new climate change report, the possibility of irreversible changes to the climate is increasing, and the world is way off track from keeping within the bounds of the 1.5 degrees Celsius of warming limit. As a result of human activity and the burning of fossil fuels, and without drastically cutting emissions, temperatures will keep rising, with the earth’s surface warming projected to increase by 1.5 degrees Celsius within the next two decades, and average temperatures exceeding 2 degrees Celsius by the end of the century.

The discussion also highlighted the findings of the UNEP Emissions Gap Report that provides an overview of the difference between where greenhouse emissions are predicted to be in 2030 and where they should be to avert the worst impacts of climate change. The report concludes that a brief dip in carbon dioxide emissions caused by the COVID-19 pandemic, the world is still heading for a temperature rise in excess of 3°C this century.

Moreover, IPCC AR6 presents more evidence on current and projected temperature and hydrological extremes at the regional level, which improves understanding of the effects of global warming on every region of the planet, with more of the changes being irrevocable.

The trend of heatwaves and extreme cold is expected to continue over the coming decades. Heavy precipitation will increase in frequency and intensity (high confidence), leading to more frequent landslides in some mountain areas. Seasonal snow duration, glacial mass, and permafrost area will decline further by the mid-21st century. A changing snowmelt regime in the mountains may contribute to a shift of spring floods to earlier periods in Central Asia. In Kyrgyzstan, the melting of glaciers is not only becoming more intense, but the duration of its period is also increasing: from early spring to late autumn. In mountainous areas, precipitation in the form of rain rather than snow is becoming more frequent.

Observations also indicate that persistent droughts were the main factor for grassland degradation and desertification in Central Asia at the beginning of this century. The summertime temperature increase will enhance evapotranspiration, facilitating ecological and agricultural drought over Central Asia towards the latter half of the 21st century. The potential burned areas in five Central Asian countries – Kazakhstan, Kyrgyzstan, Tajikistan, Uzbekistan, and Turkmenistan – will increase by 2%-8% in the 2030s and 3%-13% in the 2080s compared with the baseline (1971-2000).

All this unequivocally leads to the conclusion that only urgent, decisive, ambitious, and united actions can contain the worsening climate impacts and avert the climate catastrophe.

Taking into account that the issues of reducing the inequity of poverty, inequality, and climate change are of paramount importance in the national strategies, and programs of the Kyrgyz Republic, the global report will be useful for developing and implementing adequate policies, as well as ensuring that Kyrgyzstan’s climate commitments contribute to common efforts to contain the rise in global temperature within 1.5 degrees Celsius.

The national dialogue was organized as part of the “The Policy Action for Climate Security in Central Asia” project funded by the UK Government and implemented by UNDP in Kyrgyzstan, Tajikistan, and Uzbekistan. A full recording of the national dialogue is available here.

The report provides the most up-to-date understandings of the climate system and climate change, bringing together the latest advances in climate science, and combining multiple lines of evidence from paleoclimate, observations, process understanding, and global and regional climate simulations.

The IPCC was created by decision in the UN General Assembly in 1998, with the purpose to furnish governments with scientific information to help them develop climate policies. The members of the IPCC are the UN Member States, and the Panel consists of experts who volunteer their time to assess volumes of published scientific papers and distill what is known about the drivers of climate change, its impacts and future risks, and how adaptation and mitigation can reduce those risks. The IPCC process includes a transparent process to summarise the strength of scientific agreement and indicate where further research is needed. The IPCC does not conduct its own research, it provides the best possible summary of what is known to the world regarding climate change.