CAN EECCA regional position before COP27 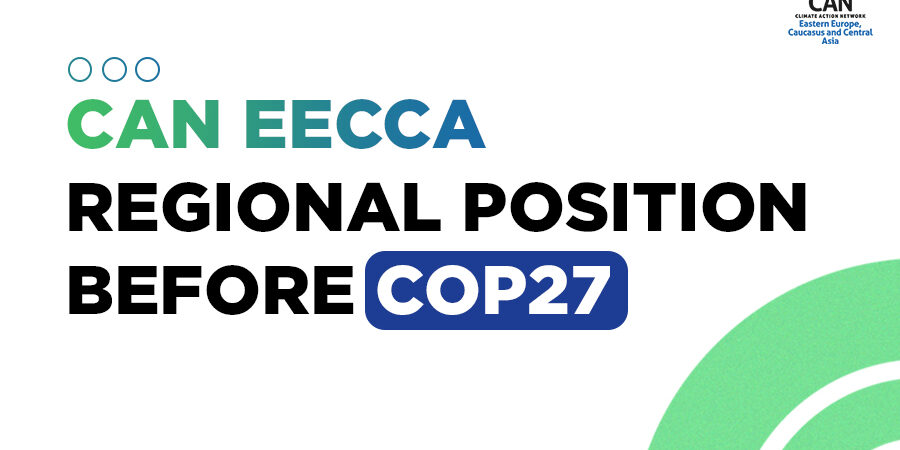 We are working to ensure that the civil society of the region is strong and organized, that the EECCA countries implement policies leading to climate neutrality and a green economy, and that there is coherence between the first and second processes based on climate justice.

In 2022, our region is facing multiple crises simultaneously. Increasingly frequent large-scale climate anomalies: heatwaves, droughts, fires and floods have caused many deaths and forced thousands of people to leave their homes, exposing insufficient action to adapt to the climate crisis.

The situation is aggravated by the war Russia started against Ukraine, as well as military conflicts between Armenia and Azerbaijan, Kyrgyzstan and Tajikistan. They claim the lives of a huge number of people, cause enormous damage to the environment, cancel many agreements between countries, including those aimed at combating the climate crisis, lead to an energy crisis due to the disruption of supply chains and the still huge dependence of countries on fossil fuels. This year has shown how dependent world economies are on fossil fuels and that they are not really ready to give up coal, oil and gas in the short term. At the same time, even more ambitious action is needed to keep global temperature rises in line with the goals of the Paris Agreement. We need to get rid of the life-threatening dependence on fossil fuels in order to save life on the planet.

We call on the parties to the UNFCCC to set a deadline for phasing out fossil fuels and to accelerate a just transition to green energy to avoid subsequent military conflicts and catastrophes.

One of the main issues in the upcoming negotiations will be financial compensation for loss and damage from the climate crisis. The countries of the Caucasus and Central Asia are very vulnerable to climate change – they are already experiencing a decrease in the amount of water, droughts and melting glaciers. There is a great threat of desertification, loss of pastures and crops.

We urge the parties to the UNFCCC to agree on an annual amount of compensation for loss and damage in vulnerable countries in the form of grant support, rather than lending.

We call on the parties to increase funding for climate change adaptation to 50% of the total allocated money.

EECCA countries have great potential for climate change adaptation and green transition. At the same time, strategies created at the national level very often remain “on paper”, without leading to concrete improvements at the local level.

We call on negotiating parties to support the ability of local civil society organizations and municipalities to receive climate finance and provide technical support for this.

To avoid a global energy and food crisis, the parties to the Paris Agreement must move towards decentralization and a more equitable distribution of resources for adaptation and mitigation. To do this, it is necessary to encourage the activity of public organizations in each individual country and include them in decision-making.

CAN EECCA will continue to support civil society organizations in their pursuit of creating a more just and fossil free world.